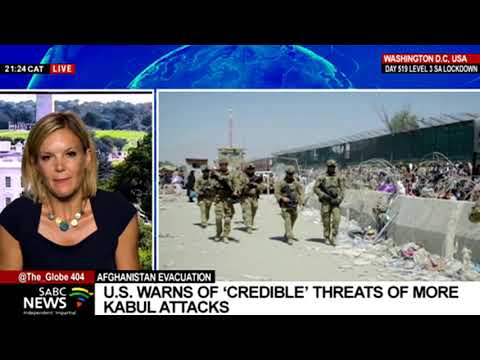 U.S. officials have warned that the risk of additional attacks targeting American forces in Afghanistan remains high after a suicide explosion claimed dozens of lives outside Afghanistan’s Kabul Airport yesterday. The Pentagon also clarified today that there was only one bombing, correcting initial information they put out on yesterday’s attack. Some reports put the toll at over 100 including the deaths of 13 military personnel – the deadliest day for U.S forces since 2011 and their first casualties in 18 months. An emotional U.S. President Joe Biden spoke at the White House late Thursday vowing to hunt down the perpetrators while confirming that evacuation operations would continue until a Taliban-agreed deadline of August 31st. For an update, we are now joined by SABC correspondent Nina-Maria Potts live from the U.S. Capital Washington, D.C.